We started our 9th week of the season with pleasant weather, clear river conditions and winds coming out of the North and NE depending on the day. In some pool, the winds made things a little tougher than usual.

But that didn’t matter to Ian & Stuart who, in their first session, landed 7 fish including a 21, 18 and 15-pound fish! A fantastic welcome for our Aussie friends who were joining us for the first time. Not to be outdone by their previous day’s performance, Ian landed a beautiful 19 lb hen the next day and Stuart followed him during the last session with another beautiful buck trout just shy of the 20 lb mark.

Paddy, not wanting to lag behind, landed 7 fish in one insane session and hooked more than he could remember. Kudos Paddy!

Bruce & Earl, who also were visiting us for the first time, did a great job learning the ropes around here and ended the week landing some beautiful fish in the high-teens.

Our tackle for the week proved to be the same as the weeks before, and a wide arrange of line-and-tip combinations were used. But, I can say that heavy sink tips were the most successful choice. In the flies department, several different patterns were utilized from tube flies to small Green Machines. Seemingly mirroring the season’s off-and-on pattern of fish activity, there was not a clear winning fly pattern, and we were forced to try several combinations until we found something that the fish liked and took with conviction.

Thankfully, the weather forecasts were not accurate and the heavy rains that were expected for the last few days of the week didn’t show up, and we expect to have similar, favorable fishing conditions for the upcoming week. 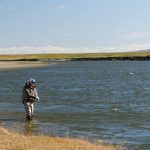 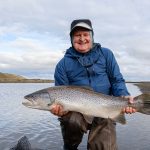 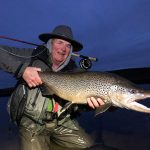 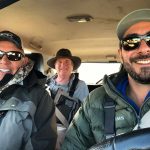 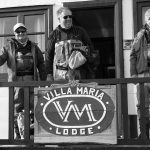 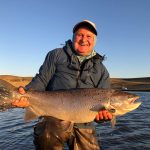 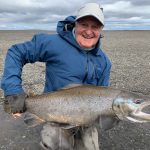 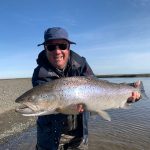 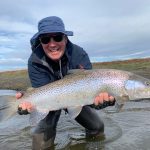 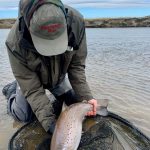