The Rio Grande’s reputation as the premier sea-run brown fishery in the world is no secret. But it remains a river that offers surprises week after week. Even for the most experienced guides and fishermen, nothing is to be taken for granted. And just when we thought we’d had an unbeatable week, we had an even better one! The story continues to evolve.

Weather and river conditions remain typical for this timeframe: sunny, very windy, and a yo-yo effect of mild to cold temperature swings. Wind blew hard and steady (westerlies up to 45 mph), but it can be a great ally when the sun is shining high in the sky. It hides bad casts and—with ultra-low water conditions—fishermen from being spotted by their quary.

Fishing has been great both throughout the day and into late-afternoon and evening. The big, fresh sea-runs are in and continue to seek shelter in deeper pools during the day. This required heavy tips to target fish hunkering in narrows channel etched into the river bottom. Skagit lines with short and heavy tips (up to 9 inches per second) produced the best results.

As for flies, it’s been a mix. One day they prefer leeches, the next prince nymphs or medium-size rubber legs. Experimentation is key.

Our fishermen included a group of Austrians and Germans who’ve been returning to Villa Maria for 10 years. Simply put, they reckon this week has been their best… so far. 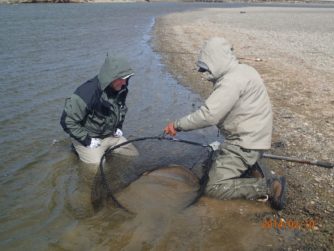 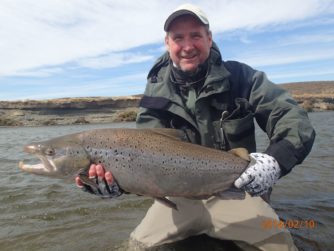 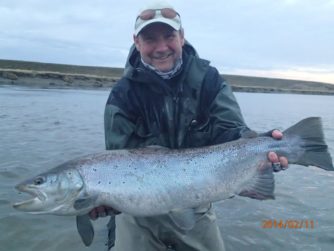 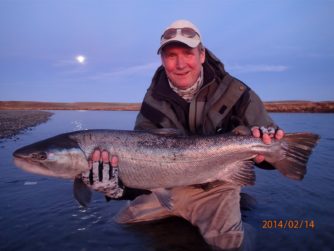