Typical March weather on the Rio Grande is marked by cold morning temperatures, cool afternoons, and low winds. But when you fish a subpolar region like Patagonia, you have to be prepared for anything.

Last week was just one of those weeks: rain, snow storms in the Andes, and strong winds—which resulted in a rising, off-color Rio Grande. To combat the conditions, we fished heavy sink tips and big colorful flies. At least 15 feet of T14 (and sometimes T17/T18 tips attatched to skagit lines) was the best option. These setups were easy to cast in the strong winds, and powerful enough to turn over big and bushy streamers.

Our guests included a mix of anglers experienced with single-handed rods. They were also open to learning the intracacies of two-handed rod fishing… and the results were pretty good! Every rod caught at least one fish over 20 pounds. And Jean Daniel managed to land two fish in the 26-pound range.

The fish were not taking short. Which was good news. And our sea trout continue to smash leeches in varying color combinations. Black/yellow, black/chartreuse, and black/orange worked great, but the best performers were leeches in chartreuse, or bright orange. 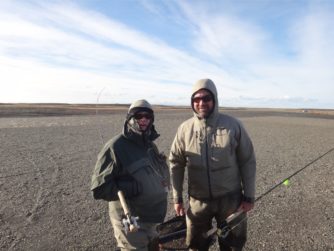 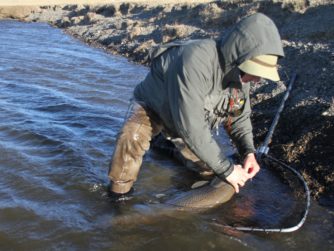 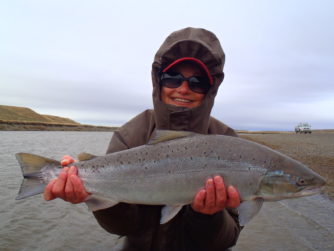